skip to main | skip to sidebar

I should rename this blog "The Lazy Renovator"

Or I could call it the lazy blogger. It's not as if I have done nothing in the past year. It's just that I haven't done much. How long does it take to remodel a master suite? About 2 years if you only work 4 hours very other weekend. At least I'm not the only one. I know there are others like me with rooms full of boxes never unpacked. At least I moved mine from the dining room (I covered them with a sheet and told my friends it was a time machine).
Anyways, I signed up for apartment therapy's spring cure so hopefully I can finish this damn house in 8 weeks. The bathroom has been done for a while, but I still want to put up wallpaperbehind the vanity. We also still don't have a toilet up there. maybe it's because there has been a dresser sitting over the pipe for the past 2 months. 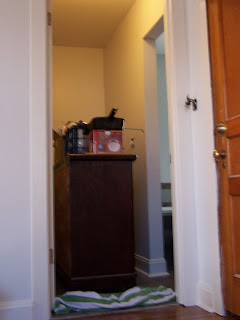 We finished ripping out the old paneling, putting up the dryall and the final coat of poly was put on our floors last weekend.
You know what that means? Next week I will be watching Lost on the big screen. See that new cable outlet. Oh yeah. My big screen has been with the time machine in a back bedroom for far too long. I hope it still works.. 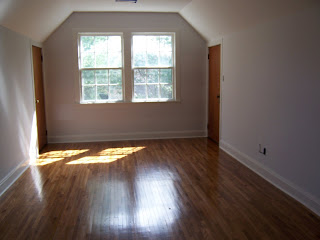 So I'm back! And I hope to be posting at least once or twice a week. I'm trying to keep up wih this whole cure thing, let's hope it works.
Posted by snail at 10:38 PM No comments:

Long days at work are easier to bear when I know that I will have a package waiting on me at home. They are even easier to bear when I order said packages at work. Not that it happens all the time or anything...
I'm definitely addicted to Overstock where I constantly check for new items (because I have looked at everything else). I also have an eBay problem. I like to just look at art that is cheap and "ending soonest". That's how I scored this awesome castle drawing in a gold frame. The owl was 4 bucks at T.J. Maxx. Love this owl! 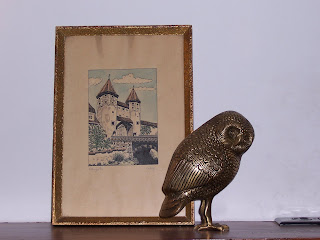 And here is a runner rug I found on Overstock. It's a little small for this hallway. maybe I should have measured first before impulsively clicking. Oops. I still love it though and kitty avoids it (which is a plus). Yes, I know my floors need cleaning. 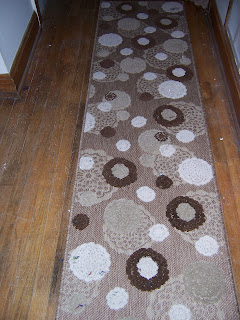 Oh and my chairs. Sigh. Overstock again. Sorry for the tile mess in the background. It really distracts from their awesomeness. These were about 60 bucks a piece which is amazing if you compare these to similar chairs out there. 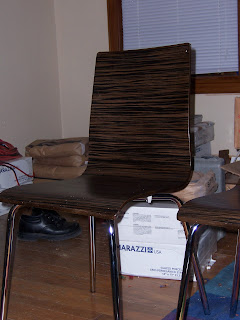 Well, that's what I have been doing besides pulling up crabgrass. I hate crabgrass.
Posted by snail at 11:00 AM 2 comments:

Luke and I said goodbye to winter and starting doing some work on the outside of the house. 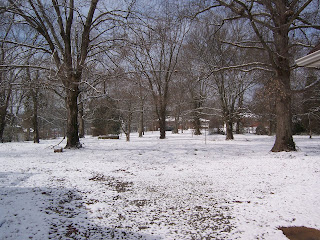 This photo sums up what we have been doing. I have been planting, and Luke has been french drain hunting with his metal detector. I planted some lady ferns in the planters by the porch stairs. It's been 2 weeks and no sign of baby ferns. I am so impatient. 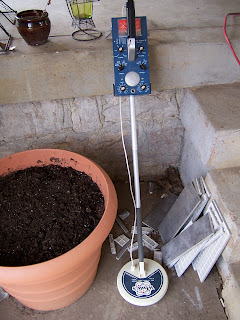 Luke started messing around in the gravel driveway and found the hole that the gutter is supposed to run into. He rented a snake and got out his metal detector. I knew that thing was eventually going to be useful. 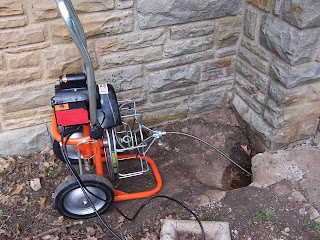 He used the metal detector to find the end of the snake and started digging. He eventually found the exit point in the drainage ditch by the road. We hooked the gutters back up and now our Porte Cache/Carport doesn't turn into a pond when it rains...which has been a lot lately. Why would someone cover that up? 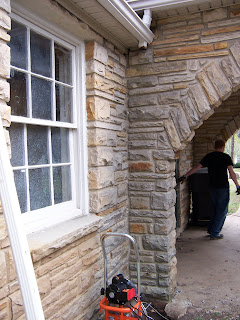 Things are really coming along now in the master bath. Bill started building the shower pan, putting up the Hardibacker, and tiling the floors and walls. Check it out!

First he laid down a layer of concrete and made a nice slope to the drain. 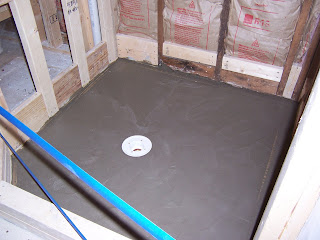 Two days later he came back and put down blue plastic and the 2ND layer of concrete. It sounded so complicated when Luke and I looked it up online. If we knew it was that easy... 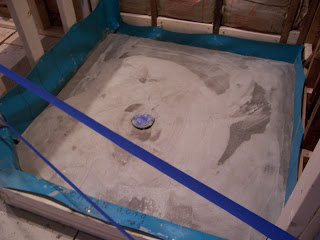 He started tiling the shower walls this weekend. I think I like our tile. Okay, I do. There was just so much to choose from, and I can't help but question my decisions. I'm no professional designer. I wish we could have done the entire shower in the glass tile, but it would have pushed the budget beyond our means. 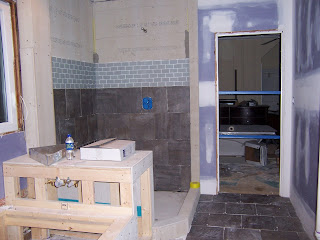 Here is a close up of the glass tile. It actually looks pretty good against the porcelain here. Maybe I do love it? 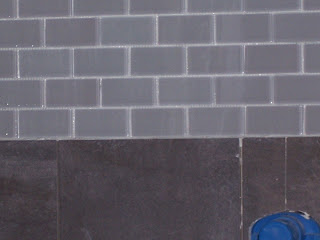 Oh, and we got a new window. It's super energy efficient and it lets in a lot more light. It cranks out towards the master bedroom deck... just in case you ever want to toss something at someone in the tub. This custom window was ordered and installed by Ted Tolen at Unlimited Windows. Want one? Call Ted today at 615-254-6700. His service and expertise are unrivaled in the Middle Tennessee area. Oh yeah, he's my dad too. 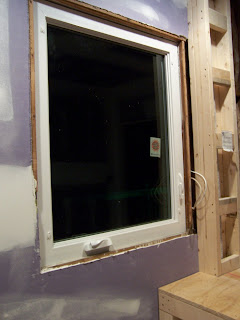 I didn't know you very well, but the way you whispered "The Mexicans" said it all. Sure you washed and folded my clothes for a mere 80 cents a pound, but you also stole my plastic hangars. Well, no more! Our laundry room is finally done. 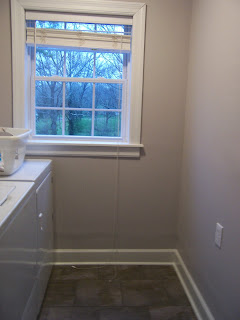 Our tile man, Bill, came earlier this week. It only took him a few hours. It would have taken us at least 2 days.
We spent Friday night painting it and Saturday touching up the paint and installing the baseboards. It should have only taken one coat, but we were idiots and bought cheap paint. Never again.
Bill loaned us his saw and nail gun for the job. This was Luke's first time installing baseboards and I think he did an excellent job. 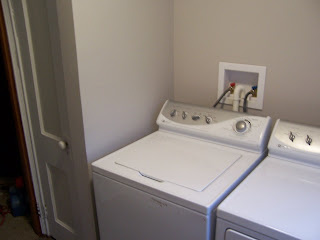 Here is a picture of the room before. This tiny bathroom was useless, and I hated the white tile and black grout. 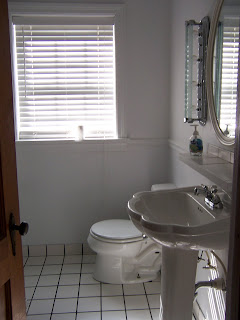 Here is a better picture of the tile pre-baseboards. As you can see, I won the diagonal vs. brick pattern argument. We had originally chosen a lighter grout color, but Bill convinced us to go dark. I think it looks great! 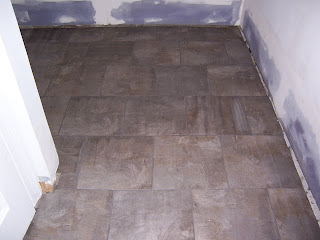 At least one room in my house is getting closer to completion. It's going to be the office, but we have been calling it the library because of the wall of built-ins that the previous owner built. It was never completely finished though, kind of like everything else they built/remodeled. Nail holes weren't filled in and they used pine instead of Oak which would have matched the rest of the moulding in the room. 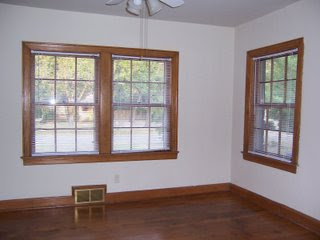 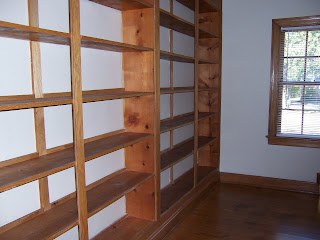 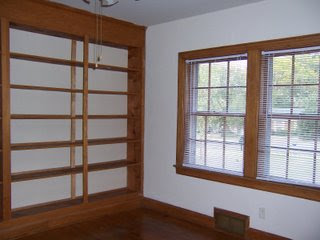 As stated in my previous posts, I am planning on re-staining most of the wood work in the house. But in this room I decided to just paint it. I wanted to paint the bookcase and I thought it would look a little weird if I didn't paint the trim too. The bookcase took a total of 3 weekends. I scrubbed, sanded, caulked, and filled in holes of 2 days. Then I took another two days to prime, and the last weekend I painted. It wouldn't have taken so long if the shelves were removable, but everything was nailed in so it was quite a task. I went with a color called Zurich White from Sherwin Williams. I'm a sucker for paint names and I think Switzerland is one of the most beautiful places in the world so Zurich White was an obvious choice.
Painting the windows was just as much trouble as the shelves. I debated on scraping instead of taping, but knew I would probably procrastinate on scraping so I chose the big blue tape. When I ran out of tape half way through, a relative said that the blue tape was overpriced and the contractor white painting tape was just as good so I went for it. Maybe he was right, but Blue tape is so much easier to remove. The White tape just wouldn't peel off and I ended up having to scrape it. Take note future window painters!
I somehow convinced my sisters to help me finish the room. They love all of those DIY shows too, so it wasn't to hard. Here is my sister Allie finishing off the windows 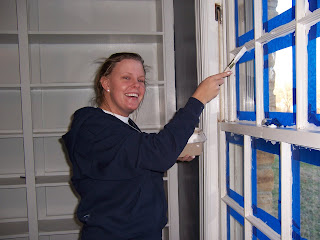 My other sister Katie rolling her little heart out.
Notice how I left the doors in their original state. I think it's better that way. 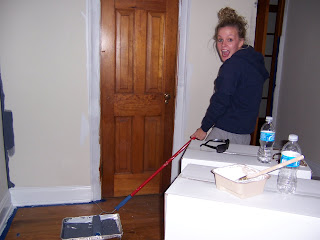 Here we are together. I cannot thank them enough!
The color is Blackberry Farm from ICI-Sinclair. I totally stole this color from one of those Flipping shows. This was the color in Jeff Lewis's office on "flipping out". It's pretty dark, but I think it looks great with the white trim plus this room gets a lot of light. 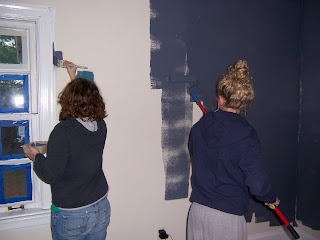 So here is the finished room! I still need to scrape off the rest of the tape, Add some bamboo roman shades, refinish the floors etc.
We replaced the ceiling fan (why so many in this house?) and put up a retro looking pendant. We got it on sale at the Home Depot Expo for 19.99! It was originally 129.00. I'm not sure it really fits in this room, but this was the only room ready for a new fixture so we just went for it.
In the rubble around me, it is nice to have just one room that is almost finished. 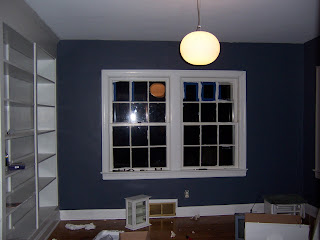 Kitty in the House

During a torrential downpour a couple weeks ago, Luke went to the basement to check out the sub pump. While he was down there he heard some strange noises. He thought it was an intruder but it wasn't (well in a way it was)...It was a cat! We thought it was an outside tomcat (we have a lot of those around here) but as we were trying to put it back outside we noticed it had a collar. We called the number only to find out that the cat belonged to our neighbors two doors down and had been missing for 2 months! Two days later a lovely basket full of organic groceries was placed on our doorstop. I'm loving this neighborhood more and more.

And here is a picture I snapped while Luke was trying to catch the frightened kitty. She ran up some duct work and dug into some newly insulated pipes. It's perfect for a "hang in there" inspirational poster! 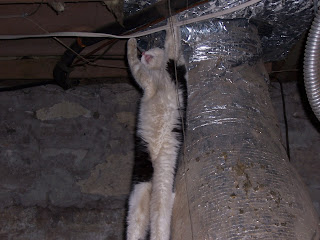